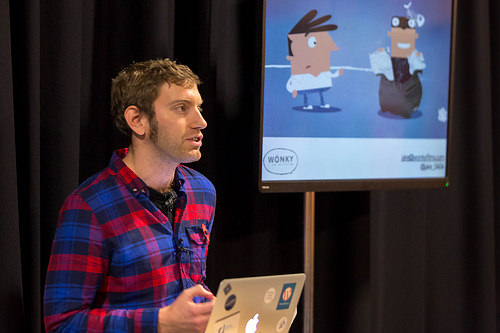 I have had the pleasure of presenting my work and research to academic and industry audiences at conferences around the world. My work has also been published in international journals.

Using GitHub to improve the provision of feedback in programming classes

Exploration of using GitHub as a learning technology innovation within programming modules in Higher Education. The core purpose was to improve the provision of feedback and monitoring of student progress.

An understanding of engagement and value based on insight from the uses and gratifications framework shows that individual consumers have very different reasons for consuming the same media. As such each consumer will receive different meanings, consequences and levels of value from its consumption. Based on this perspective it is argued that different individuals will display a varied willingness to pay based on their level of engagement and value sought from consuming the content in question.

The International Journal of Design Management and Professional Practice, May 2016

Success in the management of crowdfunding projects in the creative industries

Crowdfunding has become a significant way of funding independent film. However, undertaking a campaign can be time consuming and risky. The purpose of this paper is to understand the predictors likely to produce a film campaign that meets its funding goal. The findings question the long-term ability of crowdfunding to aid companies poorer in terms of time, financial and personnel resources, and therefore arguably in the greatest need of crowdfunding platforms.

Audience engagement and monetisation of creative content in digital environments

An practice based exploration of the limitations faced by creative SMEs as they seek to circumvent the limits of engagement, audience pressures and free culture in rapidly shifting digital environments.

Show Me The Animation

Between 2010-2017 I was the online editor for Show Me The Animation an online animation magazine that showcases independent animation. I curated the films, news and guest submissions published on the site and ran regular animation contests. I also organised and curated content for the bi-monthly events, which included screenings of international short films and talks from industry experts. Event speakers included Peter Lord (Aardman Animations), Jonti Picking (aka Mr Weebl) and Darren Walsh (Angry Kid, Compare the Meerkat).

As part of Show Me The Animation I founded the annual AniJam event run in partnership with Encounters Film Festival. Each year animators are invited to participate in the 48hr challenge and tasked with creating an original animation based on a specific theme. Now in it’s fifth year a total of 17 short films and counting have been produced as part of the event.

From 2015-2017 I worked with the Children’s Media Conference as producer on their Changemakers strand. The Changemakers profile people who are innovating and making an impact in the media space, in particular young people who are beginning to make waves and disrupt traditional ways of thinking within the children’s media landscape. Previous speakers include Jess Thom (Tourettes Hero), Jeremiah Emmanuel (One Big Community), Filippo Yacob (Primo Toys) & Stella Duffy (Fun Palaces).